I recently caused a bit of a stir on my Facebook Wall and Twitter Sunday night when I stated after having watched the NY Jets’ preseason game vs. the Carolina Panthers “I’m sorry fans but Tim Tebow is PATHETIC as an NFL QB!”

When I look at Tim Tebow, I look at him through the lense of a football fan and I see a gifted football player while simultaneously seeing a deeply flawed quarterback (QB) who — on his best day — struggles to be average.

In seeing him this way I, like many others, am missing the point. Here’s why….

END_OF_DOCUMENT_TOKEN_TO_BE_REPLACED

I think this cartoon pretty much says it all! LOL

I’m sorry fans but Tim Tebow is PATHETIC as an NFL QB!

They should call these LOWlights instead of highlights.

Radical technology No. 1: Virtual shopping from the living room

Interesting article on how brands have marketed product based on culture

The Racial Divide on … Sneakers

What the history of footwear reveals about a cultural divide — and the appropriation of African American style.

Everybody wears them sometimes: to run, to bum around the house, to move furniture. Some people wear them as a fashion statement. Others have been killed for them.

There have been murders over Air Jordans in black communities for years — yes, Air Jordans in particular. Sneaker-related violence is so infamous among African Americans that in December 2011, when Nike introduced an update to that model, a widespread hoax on the Internet had it that an 18-year-old named Tyreek Amir Jacobs was murdered while shopping for a pair.

Meanwhile, mostly white hipsters, rockers, and other subculture types perennially buy new Converse every fall. It’s comparatively rare to see them in Jordans or Dunks, and it’s virtually unheard of that they’re subject to sneaker-related violence. What accounts for the contrast?

Jordans and Chucks come from the same originary sneaker, a canvas plimsoll from the mid-19th century. Both are named after basketball stars (one black, one white, we might note). So why is the former Jay-Z and the latter Dylan? How did the first become associated with black street culture and the second with white-dominated hipsterism? And what happens when said mostly-white hipsters decide they want to wear dunks too — as they did in the mid-2000s, for about 10 minutes?

This past Thursday night I watched the Philadelphia Eagles preseason opener against the Pittsburgh Steelers via the NFL’s Preseason Live iPad application. Despite a few bandwidth kinks, I thought it was a step in the right direction for the NFL to properly utilize digital tools to drive deeper fan engagement. It was a pretty good app that allowed me to stream the game live and watch it on my iPad. I could also see box scores from the game and get live play by play data. For a $20 purchase fee, the app gives users access to all preseason games.

The app was good but it could have been better. I thought the NFL lost an opportunity to reach even higher engagement heights, similar to the Olympics app NBC built for the iPad. The Olympics app was clearly built to not only be a great digital companion to those watching the Olympics — the Primetime Companion feature of the app streams in facts and photos of specific athletes who are performing events in realtime  — it also is jam packed with social features that allow you to amplify your viewing experience via social channels. 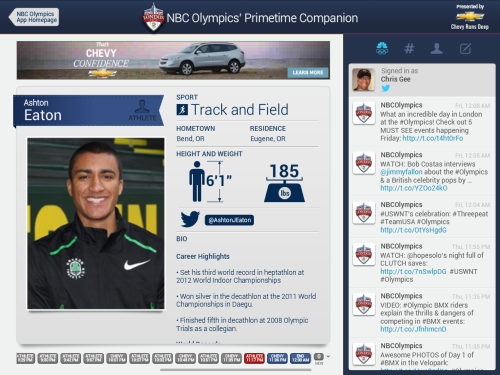 While the NFL is by far the most popular sport in the US at the moment, and has been for the past several years, it has been well documented that despite it’s overwhelming popularity with fans, actual in stadium attendance has been declining over the past 5 years. Why? 2 important reasons:

As popular as the game of football has gotten, the in stadium experience is just not able to keep up in some respects with the experience fans get in the comfort of their own homes. This is significant given the fact that prices for NFL tickets can easily run $150 per seat and more.

The NFL knows this and in response, it is working to provide Wi-Fi in each of its NFL stadiums — a great move since data tends to be strained with tens of thousands of concurrent users toting smarphones at each game. Once Wi-Fi is readily available in each stadium, it will be critical that the NFL develops apps that offer exclusive experiences and features for fans while in the stadium. It also goes without saying that these apps need to be 100% integrated with social media functionality.

Think about it. What if the NFL app was similar to the Apple Store app, which has a core set of functionality when you’re not in an Apple store but is dramatically enhanced with additional features when you’re IN the Apple store? What if your NFL app made you eligible to exclusive give-aways like team paraphernalia or would make you randomly visible on the Jumbotron if you’re logged in and tweeting via a hashtag? What if, similar to the Apple Store app, you could purchase gear via your app and bypass the long lines that are typical of NFL pro shops in stadiums? And if I’m at a game and actively pushing out content via social channels, maybe I can be eligible for a discount off the price of a future ticket purchase?

You could even see an educational companion that explains the rules like the “tuck rule” or breaks down the X’s and O’s specific to teams you’re watching, like those who run the Tampa 2 defense vs a 3-4 or Wide 9.

I think the sky is the limit in terms of what’s possible for the NFL and how it can increase engagement with fans, certainly while in stadium but outside of the stadium as well. It will be interesting to see how the NFL handles integrating digital/social tools going forward. The good thing is that it has millions of rabid fans who are counting down the days before the start of the season. How it draws those fans closer to the game will determine whether or not we see a reversal of the downward trend in attendance.